Several months since The Darkness won the Superbowl, we finally get their new album, and it's a good one. Is it Permission to Land? No. Is it just as good a rock album as Permission to Land? Yes. That's the thing that many people forget about The Darkness. They are some of the best note for note and riff for riff no frills straight up '70s inspired hard rocker song writers. Front man Justin Hawkins' Freddie Mercury meets Johnny Rotten voice, coupled with his brother Dan's guitar, Frankie Poullain's base and Ed Graham's drumming make for the best '70s arena rock that was never played in the '70s. Their more than that though. These cheeky English bastards have the best sense of humor in rock next to Dave Grohl's. Hot Cakes doesn't skimp on the humor, or the riffs. 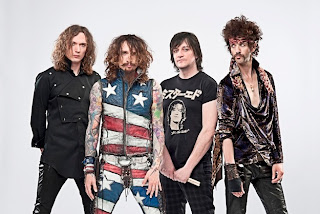 There are seas of sleeveless T-shirts
And queues around the block
And every man wanna try
Wants to
Suck my cock!

The whole song is an ironic send up of poor beginnings, super rock stardom, and egotistical rockers. In other words its brilliant. The album continues on to display some of the best kind of  rawk guitar soloing in "Nothin's Gonna Stop Us Now," to the bluesy rock of "With a Woman" to the chugalug rock of "Keep Me Hangin' On" to the "Love is Only a Feeling"-ish rock balladry of "Living Each Day Blind" and that's only the first half of the album. "Everybody Have a Good Time" recalls their biggest hit "I Believe in a Thing Called Love." The song is also the home of their best video since the one for the aforementioned biggest hit. It also has some of the best guitar work on the album in it. The rest of the songs from here on out go downhill with the exception of the hard thumping "Concrete" and the equally hard thumping and well constructed songsmanship of "Love is Not the Answer."

The Darkness are the most serious and talented musicians to come off as totally tossers...by design. Their full bodied sound and their lead singer's voice are unmistakable, making them the most recognizable of bands as well. Hot Cakes, even though it doesn't match the hilarious glory of Permission to Land, is a solid and thoroughly enjoyable rock album.