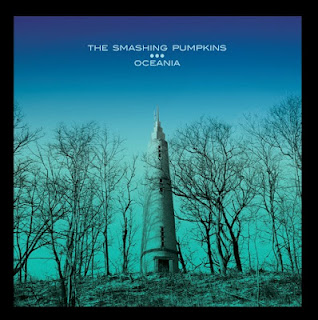 A quasar is “among the most luminous, powerful, and energetic objects known in the universe.” So is the first song on The Smashing Pumpkins’ long awaited new album Oceania, the aptly titled “Quasar.” In fact, the entire album stakes a claim at being the most powerful and energetic sounding object of the decade, which suffered from a serious lack of good music in the loud and guitar driven alt-rock vein. At the outset of “Quasar” Billy Corgan boldly declares "God, right on!/Krishna, right on!/Mark, right on!/Yod He Vau He Om/Let's ride on!" alluding to some of the most recognizable metaphoric quasars ever believed in, prayed to, or relied upon along with some of his interest in the Christian, Hebraic, and Oriental mysticism that he’s allowed to bubble up to the surface of his songwriting recently. All the references though are towards powerful, beneficent, and powerfully uplifting and life changing entities, both esoteric and common. The music that Corgan wraps these ideas in beautifully brings these entities to life in a vivid, multi-textured, “luminous, powerful and energetic way” not just during “Quasar,” but throughout the album. Oceania is easily the best Smashing Pumpkins album since Siamese Dream and Mellon Collie and The Infinite Sadness, and those were two of the best alt-rock albums ever written and released. 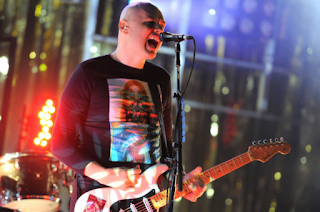 There isn’t much melancholy or infinite sadness present on Oceania though, and that’s a good thing. I once alluded to Zwan as being “the Smashing Pumpkins but happy” when describing them to a friend of mine. Happily now we have a Smashing Pumpkins that sounds like “Smashing Pumpkins but happy,” and there’s very little that this Xer could have asked for from one of my generation’s most prolific songwriters and guitarists. The absence of Jimmy Chamberlain, James Iha, and D’arcy, the long departed and lamented founding members of the band, honestly is not a turn off here as Mike Byrne (drums), Nicole Fiorentino (bass), and Jeff Schroeder (guitar) envelope Corgan in the same wall of sound and polish that his old crew did. The sound is slightly different, and has been described over and over again in just about every review of this album on the web as “Smashing Pumpkins but modernized.” It is instantly recognizable without being a retread of Smashing Pumpkins past.

For an album that has no released singles, it is an album packed with the type of distorted guitar songs (singles) that Billy Corgan built his career with the Smashing Pumpkins on. The aforementioned “Quasar” is a thick and loud throwback to the glorious guitar laden hits of both Gish and Siamese Dream. The warm acoustic guitar and synthed out strings that open “The Celestials” is reminiscent of “Disarm,” but “The Celestials” soars into sonic territory that “Disarm” never took us. Corgan’s knack for powerful songwriting and excellent guitar playing are on full display here. “Violet Rays” sounds like the best song off of Adore that never was, but could have been if included on that album. It’s thick and heavy bottomed yet uplifting. “My Love is Winter” is the highest charting single off of Oceania that never will be and showcases Corgan’s brilliant soloing, the likes of which we haven’t been treated to since “Soma” off of Siamese Dream. “One Diamond, One Heart” is almost U2-ish sounding with its clean but not clear guitar jangles. “Pinwheels” builds a sonic landscape of synth, acoustic, and George Harrison-esque electric guitar that doesn’t even feature Corgan’s vocals until almost halfway through the song. “Oceania,” the album’s title track, weighs down the middle of the album with some introspection (“I’m so alone, so alone, but better than I ever was” croons Corgan), some fantastic “grunge in furs” guitar work and demonstrates that Corgan can still write a ponderous song (“Oceania” clocks in at 9:05 minutes) that is as epic as it is uplifting. “Pale Horse” is the second best single off of Adore that never was but could have been if included on that album. “The Chimera” is the younger brother of “Bury Me” off Gish. They share the same energy and grungy guitar sounds. “Glissandra,” my least favorite song on the album, recalls the strange guitar sounds and groves of my least favorite Smashing Pumpkins album Machina (the album that oddly enough is home to two of my favorite Smashing Pumpkins’ songs: “I of The Mourning” and “Stand Inside Your Love”). “Inkless” features more of Corgan’s signature guitar soloing that once again recalls the best guitar soloing moments off of Siamese Dream. It’s an incredibly powerful song. It's the type of song that would highlight a lesser talented artist's album, but for Corgan is a late album track. “Wildflower” will remind Smashing Pumpkin fans of the light and airy final songs of Siamese Dream and Mellon Collie and The Infinite Sadness. It’s a gentle landing to an album that soars to the edges of the universe, beyond, and back. 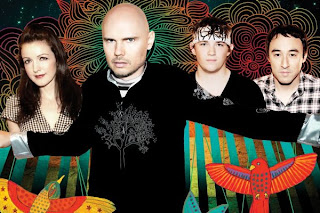 Oceania is the type of album that we long suffering Smashing Pumpkin fans never thought that we would get to experience. Zeitgeist wasn’t a bad alt-rock album by any stretch of the imagination. It just wasn’t a good alt-rock album from The Smashing Pumpkins. Yes, it too had its moments (“Bleeding the Orchid” and “Doomsday Clock”), but Oceania is a moment. It’s a moment in musical history that can, and needs, to be savored over and over again. It leaves you wanting more from The Smashing Pumpkins, and hopefully with Corgan sounding more re-energized, and happy, than he has in years, more won't be far behind.