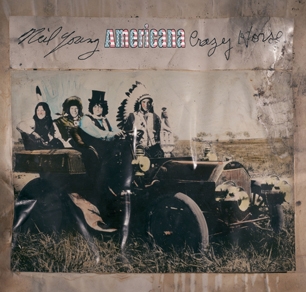 I really got into Neil Young’s music in 1989 when he released Freedom and its legendary single “Rockin’ in The Free World.” That song would go on to become an even bigger hit when Pearl Jam went on to cover it with him on The 1993 MTV Music Video Awards show (probably the last watchable one) and at the end of nearly every one of their concerts. Over the years I’ve continued to follow and deepen my appreciation for Neil Young’s music. His work with Crazy Horse, his long term backing band, has always been especially strong. Young isn’t afraid to experiment though, both with Crazy Horse and others (Pearl Jam was his backing band for Mirrorball, one of his strongest albums ever). On Americana, his first album with Crazy Horse in nine years, Young dusts off some elementary school-folk songs that used to be more than just elementary school-folk songs and digs out their deeper, and sometimes darker, gravitas by washing them through his trademark distorted and grungy guitar. Canadian by birth, American by spirit, and Godfather to grunge by trade, Neil Young not only reinvigorates a powerful cross section of American music, he invigorates the Americana that is Crazy Horse as well by delivering their best album together since 1996’s Broken Arrow.

“Clementine,” “Tom Dula” (after the original spelling of “Tom Dooley”), “Gallows Pole,” and even “Oh Susanna” are heavily, and slightly darkly, reworked here bringing out their underlying themes about the struggles that so many Americans in the 18th and 19th faced. Most of these songs are about death and its consequences. Sometimes the protagonists end up moving on, “So I kissed Clementine’s little sister and forgot about Clementine” is the last line of “Clementine” but most of the time the result isn’t as happy. Young’s guitar playing soars on most of these songs and even approaches a bit of old school Hendrix –like joy and ecstasy. Smack in the middle of all of the gloom (the reworked and harsher sounding “Jesus’ Chariot,” i.e. “She’ll Be Coming Around the Mountain” and depressing “High Flyin’ Bird” round out the album), Young drops in a joyful rendition of The Silhouettes’ 1957 hit “Get a Job.”  It serves as a stark contradiction in subject matter to that of the other, and much older, songs on the album. It reminds one how easy everyday life in the 20th Century was compared to that of the 18th and 19th Centuries. 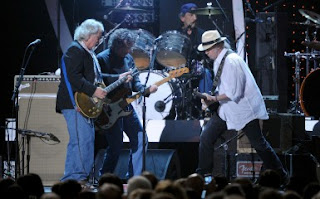 Young and Crazy Horse finish the album with a rousing and slightly protest and left-leaning rendition of Woody Guthrie’s “This Land is Your Land” and the traditional “God Save the Queen” whose melody is the foundation of “My Country ‘Tis of Thee.” Here Young mixes up the lyrics of the original song with the traditional lyrics. The mash up reminds one that America’s music and political heritage owes as much Great Britain’s as it does the Ancient Roman Republic’s. The song though is much more known these days as “My Country ‘Tis of Thee” rather than “God Save the Queen.” Fittingly, the newer lyrics to the song finish Young’s version. Neil Young, before becoming the Godfather of Grunge, was the Godfather of Rustic and Grungy Sounding American music, and Americana simply reinforces this fact. Released on the cusp of summer, Americana is just the type of patriotic yet introspective album that can serve as the perfect thinking man’s soundtrack to summer.

Rating: 4 of of 5 grungy riffs