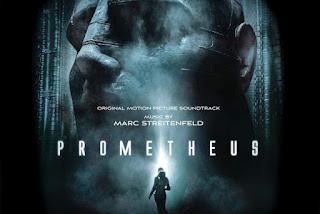 The Avengers ruled and The Dark Knight Rises will dominate, but the movie that I’m dying to see this summer is Prometheus. Ridley Scott’s return to science fiction and the world of Alien (1979) in this quasi-prequel of sorts to his legendary film is itself reason enough for me to want to see this film, but the story that he will be directing piques my interest even more than his incredibly directing skills and the sure to be top notch special effects. The story behind the Space Jockey (the massive alien creature pictured in Alien (1979) in the derelict ship where the pods with the face-huggers were originally found by the crew of the Nostromo), and their connections to life on Earth and the xenomorphs themselves is hopefully going to be a story akin to the brilliance of other sci-fi art films like 2001: A Space Odyssey (1968) and Sunshine (2007). Even if it doesn’t though, its dark and powerful original score by Marc Streitenfeld at least matches the sonic power of those other two films, with only the score to Sunshine (2007) possibly edging it out.


Unlike the soundtrack to Sunshine (2007), Prometheus’s soundtrack makes use of more traditional arrangements and instrumentation. It does though mix in some subtle electronic/industrial sounding noises to great affect where such sounds will serve to heighten either the frightening aspects of the scene it accompanies or relate the industrial grind that the whole mission and the Weyland-Yutani Corporation represents. One standout track “Engineers” (another rumored name for the Space Jockeys), employs both traditional and non-traditional sound to beautifully, and a little frighteningly, convey the work that the Engineers are doing during the film (possibly creating the xenomorphs?). Other standout tracks like “Discovery” and “Not Human” are darkly frightening and suspensefully orchestrated. The low strings and heavy tuba sounds create a heavy atmosphere that one can just picture in their minds if they’ve seen Alien (1979) and the trailers for Prometheus.


Swiss surrealist artist H.R. Giger once again designs Scott’s sets and creatures, both bringing to life the until here lifeless Space Jockeys and whatever new horrific xenomorphs the film will showcase. His art is dark and heavy and displays a strange, but somehow sublime, amalgamation of both the mechanical and the biological. Bio-mechanical sounding is a good way to describe Streitenfeld’s score. The track “Too Close” is a perfect sonic description of this. The pulsing and oscillating undercurrent of sound in the track is reminiscent of the pulsing and oscillating biological rhythms of a living thing, and the over laying sounds of strings and percussion are reminiscent of the clanging and banging of industrial machinery that seems to be generated from the underlying rhythms. It’s a track that sends chills up your spine and captures the imagery of Prometheus sublimely.

Even if Ridley Scott’s return to sci-fi is disappointing and forgettable in its final composure, the accompanying soundtrack to Prometheus will definitely go down as one of the greatest and most memorable soundtracks of all time.
Posted by The Ear at 7:48 PM

Email ThisBlogThis!Share to TwitterShare to FacebookShare to Pinterest
Labels: soundtrack