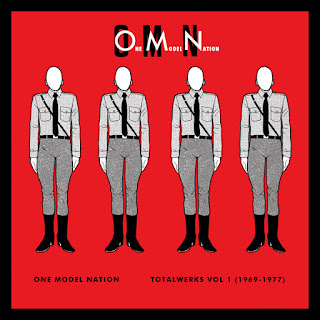 Courtney Taylor-Taylor of The Dandy Warhols has a special place in his heart for graphic novels, as well as the electronic/industrial music of late 1970s Berlin, like Kraftwerk. Both his love for the two come together in the dual graphic novel and album project One Model Nation. While the graphic novel that the music is partially inspired by is brilliant (read my thoughts on it here), the music is just as interesting.

One Model Nation is the story of a fictional Kraftwerk-like band that recorded music from 1969-1977, and then mysteriously vanished from the music scene in 1978. Linked to a terrorist organization active in Berlin, The Baader/Meinhof Gang/Red Army Faction (which was a very real organization), but never proven to be affiliated with it, One Model Nation was one of the most influential youth counter-culture bands of the time. Their music was a combination of the best elements of electronic and industrial music mixed with some sparsely sprinkled guitar riffs and live drum beats that would (fictionally and solely in the world of One Model Nation of course) go on to inspire bands like Meat Beat Manifesto and Nine Inch Nails. 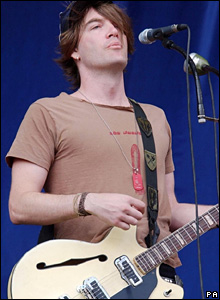 In reality, Taylor’s One Model Nation project is an inspired tribute to bands like Kraftwerk and the other pioneers of electronic and industrial music that were making some of the most interesting music of the late 1970s. A good bit harder than any of Kraftwerk’s music, mostly reflecting the wall of sound comprised of electronically washed guitars and drums that Trent Reznor so masterfully popularized, One Model Nation: Totalwerks Vol. 1 (1969-1977), employs and plays like a soundtrack to a documentary film of this incredibly talented fictional band.
The album opens with the hard thumping and metallically banging “Transmission” which sets the stage for the whole album (and is the track that One Model Nation often opens their shows with in the graphic novel). Immediately, the listener who wondered upon One Model Nation because of their affinity for Taylor’s work with The Dandy Warhols will discover that this is a totally unexpected and unique musical outing for the Portland alt-rocker. On tracks “East Berlin” and “What Is The Plan?” Taylor even evokes some inspired David Bowie sounding vocals, an artist that the fictional One Model Nation was supposed to collaborate with the graphic novel before they disbanded.
One of the noisiest, and most interesting, tracks on the album is “Russian Standard Time.” Filled with more metallic banging, fuzzed out electric guitar riffing, and incomprehensible lyrics, “Russian Standard Time” feels and sounds the most like the type of rock song that One Model Nation’s fictional fans would have discovered moshing to. “Mission to Mars (There’s No Need to Mess Up The Trip)” contains some of the album’s most discernible and possibly sensible lyrics, “ Nihilists, Communists / whatever’s fair … This is Earth / this ain’t Mars.”
The thing that is most astonishing about One Model Army is just how authentic it sounds, albeit much better produced and recorded sounding to the modern ear due to digital recording etc. One really gets the feel that this really could be music that was written and performed in late 1970s through mid-1980s Berlin. It has the sound and feel of the type of music that Brian Eno, David Bowie, and U2 took inspiration from at various points of their career, and that music projects like Nine Inch Nails owe much of their inspiration to. This aspect alone, disregarding the brilliant graphic novel that accompanies this music, makes One Model Army a concept album and side project that is actually intelligent and inspiring, unlike the horrible side projects and collaborations like Chickenfoot that mainstream rock is often subjected to. Taylor does some interesting things here, and interestingly enough it actually works.
Posted by The Ear at 10:49 PM