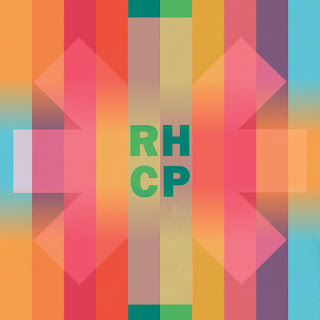 Culled from exclusive official bootleg releases, various B-Sides, and special tribute contributions spanning decades, Rock and Roll Hall of Fame Covers is as fun to listen to as it is bittersweet. The EP contains Chili Pepper covers of “Teenager in Love” by Dion and The Belmonts, “Havana Affair” by The Ramones, “Search and Destroy” by The Stooges, “Everybody Knows This is Nowhere (live)” by Neil Young, “I Get Around (live)” by The Beach Boys, and “Suffragette City” by David Bowie. The songs are fun because we get to hear all of these (some rarely available anywhere else) great covers in one place. The songs are bittersweet because on some of them, particularly “Teenager in Love,” which originally appeared as a B-Side to the “By The Way” single, John Frusciante’s voice and guitar playing is very evident. Nothing against their new guitar player, Josh Klinghoffer, who is great in his own right,  but the Chili Peppers were and always will be considered to be at their peak when Frusciante was in the fold.


The collection really demonstrates the wide range of influences that ended up making The Chili Peppers who they are today, with two exceptions. There are no funk covers on the album, and their cover of Hendrix’s “Fire” is left out. Nothing and no one are perfect though, and the inclusion of “I Get Around” which was hitherto only available on the DVD Brian Wilson’s MusiCares from 2005, almost makes up for the offense. The rest of the tracks are definitely well deserving of honor of getting covered by The Chili Peppers. From Dion to Bowie, the influences on the Anthony Kiedis, Flea, Chad Smith, and John Frusciante were as varied as they were great. The Chili Peppers always were a bit of a melting pot as far as their rock sound has been concerned, and listening them trip through Golden Oldies, Beach Music, and some of the best of from the world of Punk and Glam Rock demonstrates not only The Chili Peppers' range of musicianship, but their being some of the biggest rock fans alive. Any any rock band worth listening to knows, reveres, and most of all, enjoys of the classics that preceded them. The Chili Peppers are and do.
Posted by The Ear at 4:28 PM