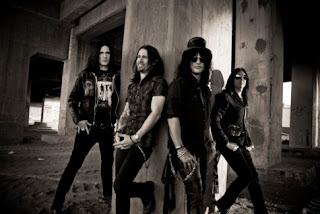 In addition to serving up the thick, juicy, and blues dipped guitar sounds that he’s been a master of since his days in Guns n’ Roses, Slash has finally found a voice with the ability to keep up with his guitar playing on Apocalyptic Love. Myles Kennedy, formerly of The Mayfield Four and Alter Bridge, while not necessarily sounding like Axl Rose, definitely displays the vocal chops that Axl employed that rounded out Slash and Guns n’ Roses’ overall sound and package. Not only does Kennedy’s voice mesh with Slash’s guitar playing better than anyone since Axl’s did (including Scott Weiland’s), he also brings some newfound cred to Slash, showcasing him as more than just a party time rock guitarist. Kennedy’s lyrics, while not quite being poetry, harken back to some of the more thematically strong Guns n’ Roses song lyrics from Use Your IllusionI and II, without the stupid cussing and whining. It’s easy to forget that this is a Slash “solo album” instead of the birth of a new and exciting band that has the potential to easily leave what Velvet Revolver did in the dust. That’s how strong Myles Kennedy’s contribution to Slash’s album is.


Not only is Myles Kennedy the voice and lyricist of Apocalyptic Love, he’s the co-writer of every song on the album with Slash, and the combination of the two’s musical talent is substantial. Songs like “No More Heroes” and “Halo” rock louder, grind harder, and simply sound better than anything off of Contraband or Libertad. Where Velvet Revolver repeated itself, often over and over again on the same album, Slash, Myles Kennedy and The Conspirators do not. This ends up being the case on Apocalyptic Love because both Kennedy and Slash meld their styles together instead of pulling each song in either one way or the other. On Contraband in particular, every other song either sounded like a Guns n’ Roses B-Side or a Stone Temple Pilots B-Side, and nothing sounded like a meshing of the two’s equally interesting rock sound. Here, the melding of the minds is complete and something familiar, yet original and interesting is the result. On tracks like “We Will Roam” we’re treated to some hefty soloing by Slash reminiscent of his best work with Gn’R, but it compliments instead of combats Kennedy’s vocal and emotional landscape. The result is another in a powerful line of great rock songs that fill the album. Even when these guys sound their most Guns n’ Roses-ish, like on “Standing in the Sun,” the result doesn’t sound forced or contrived. It simply reminds one of the good ole days of Gn’R while paying homage to it. 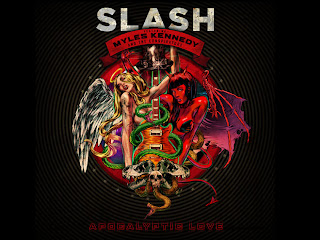 So if Slash and the rest of the Velvet Revolver crew decide to finally, and permanently, drop Weiland yet want to soldier on as Velvet Revolver, they could do a lot worse than bringing Kennedy into the fold. With he and Slash co-writing the songs, Velvet Revolver might actually turn into a band I care to listen to. If not, then hopefully Slash and Kennedy will keep the “solo” albums coming till they quit playing music, which also hopefully won’t be for a long, long time.
Posted by The Ear at 11:57 PM