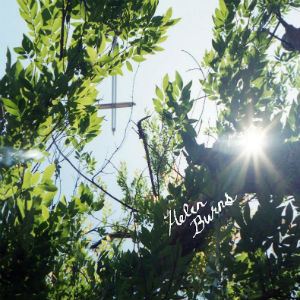 Red Hot Chili Peppers founding member and bassist, Flea, has put out an EP of music intended to help raise money for his Silverlake Conservatory of Music. At the Conservatory's website, Flea makes it very clear that the music contained herein is very much NOT like anything that the RHCP would make and release. He's definitely right on that account...in part. Helen Burns sounds like a mashup of progressive and, in some cases regressive, music that a music theory major would indulge in. (Flea attended music theory classes as USC over the past few years.) It's interesting, but nothing that you'll replay over and over like most RHCP songs.

The opening track of Helen Burns is the slightly 8 minute plus long "333." It's a sort of progressive experiment where Flea gets to wail a little bit on his original instrument, the trumpet, while crafting approaching and receding train whistle sounds. The album quickly gets better with "Pedestal of Infamy" which follows and opens much like a regular soft rock song with a solid baseline backed by some pipes, synthed vocals, and some sparse percussion interlaced with piano. It picks up the tempo as it progresses, and even manages to slide some weirdly distorted electric guitar into it. "A Little Bit of Sanity" is a short, 1 and a half minute long, progressive jazz type song that is interesting, but flies by way too quick.

The title track "Helen Burns" is quiet piano song with Patti Smith vocals. The 7 minute and 32 second long "333 Revisited" reprises the base lines of "333," but weaves some new wavy and far out synth sounds into it. Piano and trumpet are reprised here as well. The EP's final track, "lovelovelove" glides along softly with some massively distorted (or synth washed) electric guitar which hovers over a solid baseline. Towards its end, a chorus of young voices revels in the joyous assertion that "We're alive just for a while/Soon we'll die/and that will be it/so let's love/love everything in our way today." It's akin to the kind of spiritually existential theme that flows through most of the RHCP's music, so in theory, Helen Burns isn't as far removed, at least spiritually, from the RHCP music as Flea would have us think.