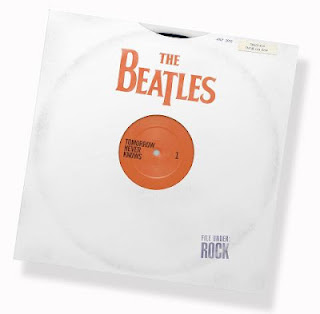 Do we really need another Beatles compilation? Well, where The Beatles are concerned, I have to admit that the word on and sound of these original rock and rollers can’t be spread about too much. Even though The Beatles is a brand now, hence the need for ever recycled and repackaged compilations of their music, more than a fondly remembered and insanely influential group of four guys from England who changed the music world, the songs that they wrote are truly timeless. Recently though, there has been a great deal of Beatles music repackaging that touted them as the original “boy band” or pop stars whose most edgy music was the mass consumable “Love Me Do” and “Hold Your Hand.” While these songs are great little pop-rock ditties, other songs like “Helter Skelter,” “Revolution,” and “It’s All Too Much” are rock tour de forces that the likes of everyone from U2 to Pearl Jam to Metallica to Nirvana to The Flaming Lips have tried with varying success to emulate and build upon. So a collection that focuses on and compiles a powerful cross section of The Beatles most discernibly guitar rock/hard rock songs is welcome, if only for the fact that it helps point out that The Beatles could really, really rock when they wanted to.

Opening with “Revolution,” the amped up and distorted guitar version, and closing with “The End” from the Anthology 3 collection, The Beatles: Tomorrow Never Knows is packed with 14 of The Beatles’ most guitar driven and harder sounding rock songs. A few, including the title track “Tomorrow Never Knows,” are a little more on the psychedelic side, but nonetheless are driven by more or less straightforward rock guitar. The hardest rock song ever recorded by The Beatles, “Helter Skelter,” written by Paul McCartney and stolen from The Beatles by Charles Manson (whom Bono has tried to steal back many times in concert and most noticeably on U2’s Rattle and Hum) just might be the first grunge song ever written. In its massively heavy chords and percussion one can hear sounds that foreshadow both punk and metal, what grunge was pretty much an amalgamation of. Everyone from Chris Cornell to Jerry Cantrell would try to write a song as heavy and hard hitting as this while retaining some semblance of the melody that McCartney infused “Helter Skelter” with. “I’ve Got a Feeling” from Let it Be would be one of Eddie Vedder’s personal favorite Beatles song and he and his band Pearl Jam would cover it from time to time. “Paperback Writer” with its dirty, bluesy guitar is the classic rock song and a worthy inclusion here.


Other tracks like “I’m Down,” “Savoy Truffle,” “Back in the USSR,” “You Can’t Do That,” and a handful of others complete the compilation. All of them are moderate to hard rockers loaded with guitar, drum, bass, and in your face vocals that any other rock band in history would be happy to have written. While we might be subjected to a never ending repackaging of Beatles songs put together to keep the corporate Beatles machine rolling along, if they are as unique and rockin’ as this one, that’s just fine by me.