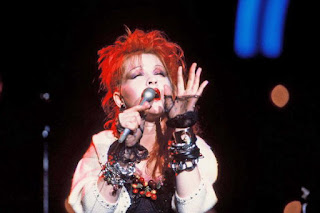 This past New Year's Eve, just before my wife and I headed out to partake in some New Year's Eve festivities, I caught part of the Dick Clark's Primetime New Year's Rockin' Eve with Ryan Seacrest 2013 special that was going through a list of the top 30 or so music performances hosted by Clark over the years on his signature program American Bandstand and others. From Jefferson Airplane to INXS there were many performers featured. One performance in particular started me on an enlightening trip down memory lane that I still haven't completely recovered from yet. That performance was of Cyndi Lauper singing "Girls Just Want To Have Fun" on Clark's American Bandstand.

I haven't listened to much, if any, of Cyndi Lauper's music since I was under the age 9, and anything I heard came from the early MTV days (when they actually showed videos) or from the radio (I was living in Western Pennsylvania at the time with my parents and brothers and THERE we had MTV). At the time pop music was pretty much all the then contemporary music I was exposed to since it was pretty much all around, and it was a few years before I discovered U2 (which lead to my affinity with alt-rock and the rest, as they say, is history-at least in my case). Needless to say, I was in love with music, and particularly rock music, at that point...what did my parents expect after all those rainy and snowy Saturday afternoons spent listening to their old Beatles, Doors, and Animals LPs? I remember Lauper and Madonna being pretty big at the same time and, for the most part, both the singers' music was pretty much off limits. Their lyrics were too sexual and their images were too "slutty." There was a problem though. While Madonna was pure mystical sex to my under knowledged and sheltered brain (enough to keep me more than interested in her), Cyndi Lauper's pop music was much more pop-rock, therefore much more appealing sonically and visually. I'd heard that Lauper looked like a punk. I didn't really know what punk was yet, but whatever it was, if it was, at the least, what Cyndi Lauper looked like, it was awesome.

My family was going through a bit of a religious extremism during those years though, since times were extremely hard financially due to what was basically the nationwide shut down of the US steel works industry for which my father worked for nearly 20 years. No matter how much one denies it, when times are hard people do cling to their God and guns a little more tightly. I know. I saw it. Being only a nine year old boy though, I thought that these two performers were two of the most beautiful women I'd ever seen in my life, so no matter how much it became more and more likely that I'd burn in hell as a result of watching their videos...I couldn't get enough of them. It was hard though to sneak around and change the TV channel to MTV or American Bandstand (when it was on-and my parents weren't in the same room) and hope to catch a performance...


...but catch a performance I did, and it was a doozy. I managed to catch the episode where Lauper and her band performed "Girls Just Want To Have Fun" and "Time After Time." I don't know if it was a repeat or if it was new, but it was not long after Lauper performed for an MTV New Year's Eve show (one that I caught at a friend's house while staying over for a parent supervised-but much more liberal as far as the TV watching was concerned-New Year's Eve party). Anyway, seeing the replay of her and her bands' performance on American Bandstand a few nights ago during the broadcast of the New Year's Eve special brought back these old memories, most of which were pleasant, but some of which were pretty terrifying too.

On November 20th, 1983 a little film called The Day After aired. It pretty graphically and frighteningly (for its time) portrayed the aftermath on the United States of a full scale global thermal nuclear war with The Soviets. Of course I wasn't allowed to watch this TV movie. We were all at home that night and not allowed to watch TV at all after it started. My brothers and I were even made to go to our bedrooms and play or read while it was on, and while my parents watched it in their bedroom, so that we wouldn't be exposed to it or sneak a peak of it on the living room TV. As is usually the case when something is left up to one's imagination though, anything that the movie might have showed paled in comparison to the images my considerably well developed imagination conjured up for me. I'd been in a pretty big state of anxiety over everything that I'd seen on the news about Regan's claim that the Russian Communists were putting nuclear missiles in Central America, which of course just ended up being more right-wing sabre rattling in order to boost the economics of the military industrial complex-of which most right-wing sabre rattlers profit quite well off of.  It scared the living hell out of me though. I remember lining up my early 80s collection of G.I. Joe: A Real American Hero action figures and praying that they would come to life and help defend my family against the Commies lurking just outside the house. Yes, the boogeyman wasn't Freddy or Jason to me when I was little, they were stupid and fake in my mind. The boogeymen were The Soviets, their missiles, and of course the impending nuclear holocaust. The fact that my father was pretty paranoid and more and more apt to believe, and vehemently share, his belief that the end was soon anyway didn't help matters (He eventually recovered from his foray into extreme Jimmy Swaggart type of religious idiocy though, thankfully.)

Anyway, during the 1984 New Year's Eve countdown on MTV featuring a pretty rockin' concert by Cyndi Lauper, a short "year in review" of Lauper's first year on MTV segment aired during which she commented that she believed we needed peace to come back into style and that "we should have the day before instead of the day after so we can talk about it first," obviously referencing the recent airing of The Day After. (Awesomely this segment and the concert are preserved on YouTube). That moment forever fused Lauper's music with my fears of nuclear war, not in a way that made me cringe every time I'd ever hear it again, but in a way that wouldn't really solidify logically for a few more years. Lauper, with all of her silly sexiness and pleas for wanting to have fun' and cherish and be there for you "time after time," once I began to deal with my burgeoning adolescent hormones that took off-and over me-every time I saw her in one of her videos, came to represent a sense of tempered hedonism in the face of possible annihilation and perhaps a veiled plea, in a performance art kind of way, for some existential sanity. Maybe living "all through the night" with a love "that feels the same without saying" was about more than just her and her lover's plight, or flight of passionate sex. Maybe Lauper was crooning about making it all through the night of the horrors of the early 80s fears about nuclear holocaust, economic meltdown (the likes of which my family were living though), the emergence of the AIDS crisis, and the uncertainty that, just as now, was a part of daily life in a messed up world. Maybe not. Either way, seeing that American Bandstand performance again for the first time in almost thirty years, which awakened the memories (auditory, visual, and emotional) of a time in my life full of frightened innocence (which in turn birthed a nascent desire to do something about being frightened), and sexual awakening (through being turned on by the, to me at least, forever beautiful looks AND personality of Cyndi Lauper) finally allowed me to link, and finally describe in adult terms, just what it was that I was feeling at the time, and felt (at least the memory of) again.

A few years on, as I began to grow more educated and mature, and finally found music (mostly from U2 which lead to an affinity for Pearl Jam and RATM) that, to me at least, lived up to the importance and brilliance (poetically and politically) of the messages I gleaned from those rainy and snowy Saturday afternoons lying on the living room floor listening to my parents' old Beatles, Doors, and Animals LPs, I pretty much forgot about Cyndi Lauper...I know now though that I will never again be able to forget the songs she sung, now that I know that it was her and her few hit songs that year that unconsciously planted, however subtly (and ironically), my lifelong interest in the intersection of music, emotional strength and fragility, intelligence, sex, and social and political activism as expressed through moving music.