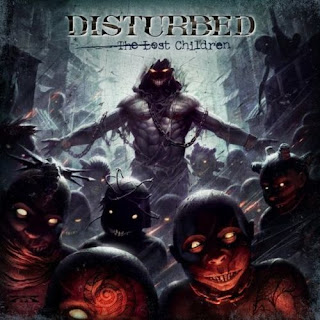 “BWAHK!” This guttural utterance of David Draiman’s, that permeated Disturbed’s first rock chart breakthrough track, "Stupify" pretty much put me off the band for nearly a lifetime. Being a dyed in the flannel acolyte of the grunge movement, I pretty much swore off all nu-metal anyway, and make no mistake, Disturbed was definitely nu-metal. While Draiman’s staccato delivery verged on the rap-metal vocal stylings that defined the earliest progenitors of nu-metal (a la Limp Bizkit and the rap that nearly ruins Evanescence’s first break through hit “Bring Me to Life”), he could never quite be considered to be rapping. This worked in their favor, and ensured their longevity in the rock world. Of course, as I mellowed and began to listen to more types of music beyond just my beloved grunge (and U2) I began to very slowly take a mild interest in Disturbed. It seemed that Draiman was dropping his penchant for making noises the likes of which I made the morning after a drink and smoke filled night of partying while leaning over the sink (ah…college year memories). Also, their single, “Prayer” from their album Believe started to show the potential that was inherent in Disturbed. Yeah, Draiman still made a silly noise now and again, but it wasn’t “BWAHK!” so I was able to tolerate it. Since then Disturbed and my moderate interest in their music plugged along, and several albums later Disturbed had become one of the most reliable, and listenable, hard rock acts to transcend the nu-metal scene and actually remain interesting, even on a collection of b-sides and movie soundtrack contributions.

While “Prayer” was the first Disturbed song that actually caught my ear, I have to admit that their cover of U2’s “I Still Haven’t Found What I’m Looking For” really got me interested in just what this band might be capable of. Unfortunately, this cover was just another in a line of covers that started a few albums before. Their cover of “Land of Confusion” by Genesis was a pretty big hit for the band, and it simply made sense commercially to include more covers of songs by groups outside their genre. That is until they released their cover of Judas Priest’s “Living After Midnight.” This practice of including a cover an album, and the somewhat repetitive type of songwriting that focused on staccato riffs that kept pace with Draiman’s staccato lyrics, all reeked a little of formula band practices. Fortunately, Disturbed were (and hopefully will be again) a talented enough group, both musically and lyrically, to deliver some creative and intelligent songs here and there. This kept them from falling into the formula band trap…to a point. “Mine” on The Lost Children is one of these songs. In fact, it is the song that really makes The Lost Children more than just background music. 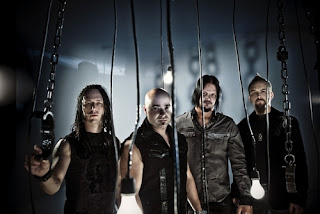 With a piano and industrial/synth grind opening that breaks into audio snippets of newscasts focusing on the all pervasive and corrupting power of greed that owes more to NIN than it does to Black Sabbath, “Mine” is a well composed and executed protest type of song that’s tinged with social commentary and a compassion for those damaged by the mantra of “MINE!” War profiteering, warring over religion, economic terrorism, and injustices of the like permeate Draiman’s lyrics. The song is great for more than just its message though. Guitarist Dan Donegan practices some effective restraint with his rather simple, but not simplistic, riffing. This allows his playing to create significant atmosphere between the hard rock riffs that he somehow seems to make sound fresh. One of the best aspects of Disturbed, which is on full display in The Lost Children, (and what defines them as alt-metal, nu-metal, or whatever) is that they avoided the athletics that really have been out of vogue now for about twenty years, although you can tell from Donegan’s small athletic bursts here and there that he could shred with the best of them. Restraint is often times more artistic though, and Disturbed verged on the artistic at times.
Overall, The Lost Children is another solid and highly listenable hard rock/alt-metal/whatever release from a band that was quickly becoming respected veterans of their chosen musical genre, until they decided to go on “indefinite hiatus.” Hopefully, they’ll figure out what they want to do next, and their next album will eschew the obligatory cover and seriously start to push their sound into further experimental, yet bone crunching, territory. Also, if they come back, it’ll be time to give their mascot “The Guy” a bit of a rest. While I’m a huge fan of David Finch’s sequential art work, sometimes we all fall victim to a bit too much of a good thing. Maybe that what Draiman and the boys did…
Posted by The Ear at 2:30 PM