The Children of Black Sabbath (and Sabbath’s Return) 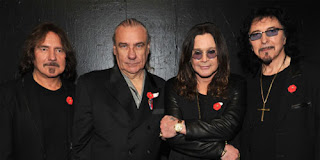 Every self respecting and heavy sounding metal/rock/grunge band that has ever existed, from Soundgarden to Alice In Chains to The Melvins, owes their existence to the original Black Sabbath line up of Ozzy Osbourne, Tony Iommi, Geezer Butler, and Bill Ward. Although Led Zeppelin definitely had a hand in the creation of heavy metal and grunge, along with Jimmy Hendrix, their sound would be paid homage to in the early Pearl Jam albums. Albums that are definitely not metal, as it is defined sonically, and in many aspects may not even be grunge in its purest form. The slow, grinding, and psychologically horror tinged dark music that would finally and honestly become mainstream, and define the sound of grunge most succinctly, with the success of the aforementioned Soundgarden and Alice In Chains, is completely owed to Black Sabbath’s early sound. In fact, a careful listen to Black Sabbath (1970) reveals that Ozzy and company are actually the true sonic “godfathers of grunge.” Going even further, Black Sabbath are the spiritual parents of even the even darker bands that slog around the death metal hollows such as Morbid Angel and Celtic Frost. The singers in these bands can’t really be called singers, though. Ozzy can definitely sing, and that’s why Black Sabbath is much more the godfather of grunge than death metal. Chris Cornell and the late Layne Staley can and could really wail. Yes, metal heads and grung-o-philes the world over definitely owe Sabbath a huge debt of gratitude for the trail they blazed musically with their first few albums… 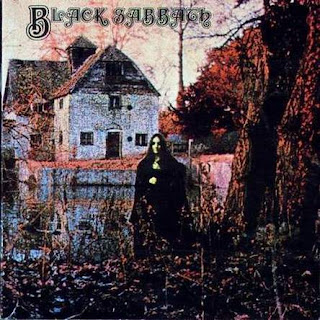 …but, their days of being musically relevant ended decades ago. While Tony Iommi has remained a guitar legend, Ozzy has devolved into self-parody and has become more of a kind, but kooky, grandfather type than rock and roll madman (well, he did have to grow up sometime). Geezer is, well, a real geezer now, and Bill…well, just what has Bill been up to recently? Ozzy did make a few interesting, and rocking, solo records, and managed to keep his controversial image alive, that is until he and his family starred on their own reality show on MTV titled The Osbournes. Black Sabbath soldiered along with the likes of singers such as Ronnie Dio, whose style of singing became accidentally parodic, and was the butt of jokes the likes of which the grunge generation lived for. Even Iommi’s once groundbreaking and influential guitar playing had become a sort of cliché as well. Dio’s singing style and Iommi’s playing would inspire the musical stylings of groups like the U.K.’s The Darkness, which would pay tribute to, while having loads of fun with, the hair metal clichés that were the bastard children of Black Sabbath’s musical heritage.
Black Sabbath’s other musical children, the likes of the bands mentioned above, which includes Soundgarden and Alice In Chains, would create some of the best heavy music ever recorded under the influence of Black Sabbath’s early albums. Black Sabbath’s first album, Black Sabbath, has nothing about it that is over the top, clichéd, or snicker inducing. It is straight forward heavy metal that would easily have been called “grunge” had the album been written and released circa 1990-93. Ponderously droning guitar, sparse and throbbing drums, dark themes (not really at all Satanic when one listens closely), socially conscious lyrics, and talented wailing defined Black Sabbath, just as these same attributes would define Badmotorfinger, Facelift, and Dirt. It may sound amazing that I, a dyed in the flannel member of Gen X, will admit that when I put on Black Sabbath, and Paranoid, I immediately recognize the musical influence that Black Sabbath had on Soundgarden and Alice In Chains, because I never would have admitted to noticing this during the height of my flannel wearing days. I swore off the denizens of the bloated rock and roll, heavy metal, and pop music past, like many of those in my generation did, in favor of the “something new” that grunge represented. Grunge did represent something new, as far as attitude, acceptance, morality (in some ways), and integrity in opposition to what the hair metal bastard children of Black Sabbath represented. I failed to realize that Soundgarden and Alice In Chains were also children of Black Sabbath, but were children of a more respectable era of Black Sabbath: their beginnings. 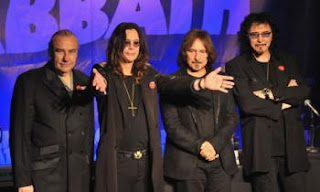 Now though, just as grunge is about to fall off the face of the Earth and the power of its influence is at an all time low on popular music, Soundgarden has reunited and are recording a new album and Alice In Chains has forged ahead with a new singer. The tide just might be turning and respectable music just might be on the verge of making a comeback in the popular music market. The question is, can the original lineup of Black Sabbath, the true godfathers of grunge, rise to the challenge of making a relevant and serious metal/grunge record? Do Osbourne, Iommi, Butler, and Ward still have the hellfire in them? Can Rick Rubin, who is producing (of course), stoke it in the guys? Time will tell, but I for one can’t wait to hear what dark passages, and towards what emerging light, a reunited Black Sabbath will take us through and towards musically.
Posted by The Ear at 1:21 AM