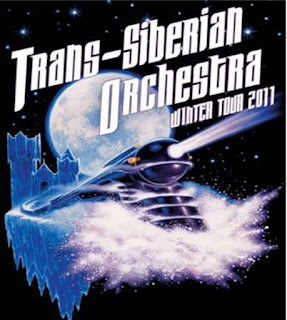 Once you’ve gotten to the point in your life where you have a pretty solid working memory of 30 plus Christmases, you’ve also pretty much heard all of the Christmas music ever made and recorded (and are sick to death of it). But…when a group of musicians comes up with a new, yet reverently classic, spin on the whole Christmas concert of carols thing, does it with electric guitars as well as a classical string orchestra, a choir of singers, keyboards, pyrotechnics, fake snow, and in as a unique and uplifting way as the Trans-Siberian Orchestra does it, all while reminding you of the magic you felt in the air around you as a child at Christmas time, you realize that you just might not have had your fill of holiday music just yet.

A Trans-Siberian Orchestra Winter Tour show is more than just a concert of Christmas songs and carols meant for those of a Generation aXe leaning. It is a show for anyone who loves the holiday season and its music (as recycled as it is every year), and those who are totally put off by the whole holiday music merry go round that every shopping mall in America (and around the world) engages in from mid-November until Christmas Eve. A TSO Winter Tour show is part heartwarming (yet not sappy or overtly religious) storytelling, part rock concert, part string and piano concert, part holiday light show spectacle, part brilliant reworking of holiday classics as well as new holiday themed compositions, and powerful and imaginative interpretations of some of the classical greats, including Beethoven, Mozart, and Tchaikovsky. After all, wasn’t Beethoven’s 5th really the first alt-rock song with its power chords, starts and stops, and vacillations between soft and loud movements? It’s almost as if the great alt-rockers of the 1990s (Billy Corgan especially comes to mind) took inspiration from this symphony. Okay, that might be stretching it a bit, but give Beethoven’s choodessny ole’ 5th a spin some time and think about it (and yes, I know that Alex, the progenitor of the poorly chosen “choodessny” word, got off on Beethoven’s 9th, but I couldn’t pass up the reference…). 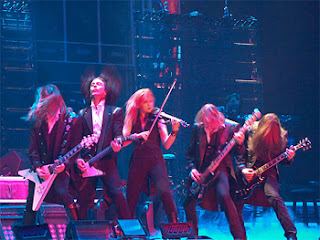 While the bulk of the music for the show is taken from their 2007 albums Christmas Eve and Other Stories (which the frame story of the concert is also taken from) and The Lost Christmas Eve, songs from their brilliant Beethoven’s Last Night (2007) and Night Castle (2009) also make up a large portion of the show, especially the encore. The first half of the show is comprised of songs that flush out and tell the aforementioned heartwarming, yet not sappy, story of an angel searching for something to bring his God as a present on Christmas Eve. The angel travels the world over from the Ural Mountains of Russia, to war scarred Sarajevo, to an old city bar in search of something worthy. The tale ends up with the anticipation of a joyous reunion and, of course, peace on Earth, at least for one night. The story is more moral than religious, and that goes a long way to broadening the appeal of a TSO Winter Tour show. There’s plenty of winter/Christmas imagery, but nothing sectarian or iconographic. It really is a story, and show for everyone and anyone who believes in doing the right thing, loving your fellow man, and sharing the simple joy with those closest to you that is a sense of community and love…
…and what a show it is as well. Lights, pyrotechnics, video screens packed with imagery that rival a U2 or NIN show (Zoo TV and Lights in The Sky respectively), and all the things mentioned above pop out at the audience throughout the show and make it a holiday concert unlike anything that you’ve ever seen. As mentioned, TSO really has discovered a way to turn the most hardened Scrooge into an adult giddy with childlike joy not felt since…well…he or she was a child. The absolute highlight of the show though is the ensemble’s performance of “Christmas Canon Rock.” An intricate and intensely moving reworking of Johann Pachelbel’s “Canon in D” composition, “Christmas Canon Rock” pretty much sums up the whole TSO experience, both musically and emotionally. Perhaps the most popular of TSO’s songs, at least amongst their more rock listening followers, it is simply the most powerfully sung and exquisitely played Christmas song, pretty much ever. It engages in all of the slight hair-metalish clichés that TSO has buried deep underneath (the founders were in a very hair metal sounding band called Savatage back in the day) including soaring vocals and some very good Van Halenish hammering, but in the context of being an exultant Christmas song, there is nothing cheesy or over the top about it. This song really does encapsulate everything that is great about TSO, and is worth a listen even if Christmas really, really isn’t your thing. 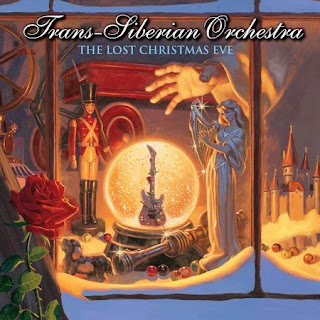 This year marked my third time seeing the Trans-Siberian Orchestra live. Amongst my closest friends, the TSO Winter Tour has become a tradition. It really is an event that we look forward to. It is a uniquely fun holiday experience, an excuse to put aside our day to day cares, and a reason to get together and enjoy one another’s company during the busy holiday time. TSO is best shared with loved ones, best friends, parents, and that special time of year. A time of year that you’ll discover can be just as magical as you remember it being all those years ago.
Posted by The Ear at 11:09 PM

Email ThisBlogThis!Share to TwitterShare to FacebookShare to Pinterest
Labels: holiday