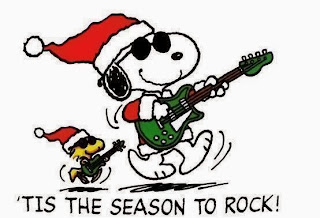 I opened up the list this year with four of the best tracks off of Bad Religion's Christmas Songs. I love these fast, punk rock versions of some of the most overplayed and omnipresent Christmas classics. Consisting of basic punk arrangements with some inspired soloing thrown in here and there, all the tracks on Christmas Songs are totally mosh and bounceable . I never imagined that I would feel diving into a mosh pit to "What Child Is This?" Totally, freakin' awesome.

Everything that Setzer did with his Orchestra over the years was inspired, but his rockabilly swinging Christmas arrangements were some of the best. Most years my Christmas playlists are heavy with BSO, so this year I cued up a track I haven't played much by BSO. Usually, "Angels We Have Heard on High" and "Gettin' In The Mood (for Christmas)" dominate, but this year I went a little more simple.

6. "Santa Claus is Coming To Town" Bruce Springsteen and The E Street Band

I know, it's gotten an ungodly amount of air time on all the SiriusXM Christmas stations, but I haven't personally listened to it much over the past few years. It's a great, fun tune that reminds you that rock and roll can be as fun as it is serious, especially in The Boss' case. If ever there was a modern rock classic Christmas cover, this is it.

Usually I spin the Sarah McLauchlan (pant, pant) version, but this year decided to get back to basics (a theme that seems to keep popping up on this list) and add the original Lennon/Ono version to the play list. No rockin' Christmas playlist is complete with out someone's version of this song. This year I felt like hearing the original.

Not really a fan of the band, or their Christmas album in particular, but this guitar, drum, and bass rendition of the Christmas tune is really, really good. It's got a great arrangement and the lead singer (whom I don't even know the name of) really nails a perfect balance between the traditional way of singing this song and a loud modern rock way.

The only Christmas song that I'm aware of that the group has ever composed, "Let Me Sleep" is a quiet little ditty that really calls to mind a snow-quiet Christmas Eve. I've been all about some PJ with the great new album and awe inspiring live show I was lucky enough to attend (and review) in Charlotte, NC on Oct. 30th this year.

11. "The Christmas Song" The Raveonettes

Next to "Christmas Canon Rock"  "The Christmas Song" by The Raveonettes is the original rock Christmas tune that will always and forever be on my annual Christmas Playlists. It's just a perfect slice of hazy, lazy shoe gaze that describes sonically how I wish my Christmas time could be every year instead of a hectic work time.

12. "Come On Santa" The Raveonettes

Everything about "The Christmas Song" applies to this one (except the original rock thing-this is a cover).

Sultry, sexy, soulful, Sheryl Crow. Way better than the Elvis version, and way sexier (to me anyway). Sheryl Crow could sing just about anything and make is sound amazing (much like Sarah McLauchlan-another hottie herself-can). A little sultry Christmas blues never hurt anyone.

An amazingly heartfelt and heartwarming original Christmas compilation from the Death Rock Boy King Billy Pumpkin himself. Everyone's favorite "love to hate" rock star of the 90s proves that he really, really can write a song about anything, including Christmastime. I've said it before, and I'll say it again, the man is the most prolific rock song writer of all time.

The 60s Brit Pop/Rock maestros from New Jersey cover two of the more fun contemporary Christmas tunes with the same tight arrangements that characterize their original material. No rockin' Christmas list is complete without at least a few offerings from The Smithereens.

Best classic to rock arrangement ever, and Canon in D isn't even a Christmas song! TSO are comprised of some of the greatest musicians to ever play. Their original Christmas rock songs are unparalleled and their mutating of classical music arrangements into guitar rock arrangements is brilliant. The vocals on "Christmas Canon Rock" are also sublime. I listen to LOTS of TSO every year so I tried to cut back this year (especially since I missed them on tour this year for the first time in 3 years), but "Christmas Cannon Rock" will always be the first Christmas song I play at the outset of the season and the last at the end. That's just the way it is.

In anticipation of their new album, supposedly to be released in 2014, and in honor of the fact that their new single "Ordinary Love" didn't totally suck, I pulled out two Christmas(y) songs from my former favorite band of all time (now eclipsed by Pearl Jam for about 12 years now). "Peace on Earth" isn't really a Christmas song but it's the closed thing that U2 has ever come to writing an original one. It's a really great song notwithstanding, like most of U2's songs used to be, and it's liner notes symbol (to All That You Can't Leave Behind-the album it is off of-) IS a Christmas tree.

That wraps up this year's list of rockin' Christmas songs now in heavy rotation at The Ear's pad. What do you think? What are some of yours? Hope you like mine.