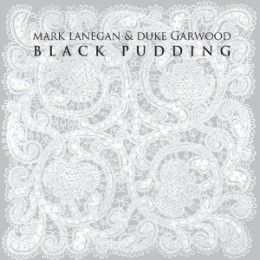 Coming pretty quickly on the heels of last year’s The Mark Lanegan Band’s Blues Funeral, Lanegan’s collaboration with English minimalist bluesman Duke Garwood, Black Pudding, completely deflates the wall of sound atmosphere that Blues Funeral wholeheartedly embraced. Blues Funeral, which featured Alain Johannes, Jack Irons, Josh Homme, as well as Duke Garwood (on a few tracks), thrived on leaving no sonic space unfilled. Black Pudding is comprised of almost nothing but space. That isn’t to say that the album is full of dead air. Rather, Garwood’s minimal playing, which still manages to say a great deal thematically, keeps the album’s sound simple. Lanegan’s Americana drenched voice scratches and scrapes nicely over top of Garwood’s threadbare arrangements creating an atmosphere reminiscent of a sultry, and slightly spooky, Faulknerian Deep South gothic. One can almost envision the floating dust motes highlighted by the yellow light seeping through the yellowed blinds of Miss Coldfield’s office as described in the opening paragraph of Absalom, Absalom! in tracks like “Death Rides a White Horse.”

Other tracks like the gently trotting “Mescalito” take Lanegan’s rasp and Garwood’s acoustic guitar playing on a trip out to the strange scenes inside the goldmines of the American Southwest much like Cormac McCarthy moved his subject and settings there (later in his writing career) out of the Deep South of his early works. “Cold Molly” brings the pair into a more contemporary age with it’s slightly funky stylings and electric guitar playing that create a strange 1970s type of smolder. “Driver,” with its slight psychedelica, is like a drive through the strangely lit electric canyons of a large American metropolis at night where only the tired and worn out denizens of the last open clubs mix with the desolate homeless in a drug or desperation fueled haze. “War Memorial,” in which Lanegan sings about officers “shot from their saddles” and “entire battalions snuffed like a spark,” over Garwood’s Mexican Southwest sounding plucking, conjures images of the bloody battles in the American West of the 1800s between both Northern and Southern armies as well as against Mexicans and Native Americans. There’s no glorification of war here, just ghostly images of the thinly lit horrors of war. In “Pentacostal” Garwood’s guitar dances lightly along the Appalachian ranges while Lanegan spins phrases about God and Satan. Garwood’s quiet mastery of nearly every type of rustic Americana forms a brilliant complement to Lanegan’s rustic voice throughout.