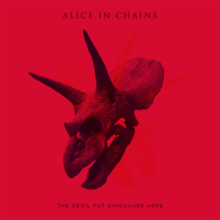 Some said grunge died when Mudhoney released an album on Reprise Records. Some said grunge died with Kurt Cobain (or Layne Staley, or Andrew Wood). Still some others said grunge died when Chris Cornell cut his hair, and then Soundgarden broke up. It’s a good thing that grunge is already dead now that Jerry Cantrell has cut his hair, eh? Regardless of when “grunge died,” somebody forgot to tell the aforementioned Jerry Cantrell about the news. Reunited, reinvigorated, and most of all re-validated, Alice In Chains (with new member and co-singer William DuVall, and returning bassist MIke Inez and drummer Sean Kinney) are continuing the sludgy/grungy tradition of detuned guitar riffs, heavy bass and drums, and that overall melancholy saturated music that brought a smile to the face of many AIC fans, and is now doing so once again.


Upping the musical artistry, AIC’s new album, The Devil Put Dinosaurs Here, is to Black Gives Way to Blue (2009) what Dirt (1992) was to Facelift (1990). Longer, harder, thicker, and more experimental, Dinosaurs is Jerry Cantrell’s contemporary masterpiece, something that he couldn’t seem to come up with on his own while flying solo. Enter WIlliam DuVall (Comes With The Fall). DuVall’s vocals mesh and expand Cantrell’s vocals much like Cantrell’s once did for Staley’s. While little is needed to improve upon Cantrell’s writing (he wrote most of the old AIC songs dontcha’ know?), DuVall’s presence pushes Cantrell’s writing into a wider sonic territory. DuVall himself even rips out a glorious solo here and there as well. The new AIC dynamic is the same as the old AIC dynamic. As far as the instrumentation goes, it’s obvious that Cantrell has been listening to (and making) a variety of guitar music during his wanders as a solo artist, but the bedrock signature AIC wall of heavy guitar sound still dominates, as it damn well should.

“Hollow” and “Stone” have been all over the airwaves (if anyone still listens to the airwaves) and while they are comprised of the classic AIC bedrock grunge guitar, and are quite powerful rock songs in their own rights, they aren’t even the strongest songs on the new album. “Phantom Limb,” the album’s standout full on heavy guitar rock track is absolutely brilliant and inspires repeat listens despite its 7 minute and 8 second length. This is the stuff of rock/metal legend and is the epitome of the best of the genre. Equally brilliant, if on the other side of the AIC rock/grunge spectrum, “Voices” is the type of song that brings to mind the classic mid tempo AIC rockers like “Heaven Beside You” and “Don’t Follow.” The album’s title track “The Devil Put Dinosaurs Here” is an oscillating quasi-psychedelic/bone cruncher that sees Cantrell make his first serious forays into social commentary. The track’s indictment of religious fundamentalism, the kind that the American far right uses to justify ignorance and intolerance, smolders.


While the album doesn’t really feel like it is overall too long despite its songs’, at times, ponderous lengths, both “Lab Monkey” and “Low Ceiling” do almost feel like they run on a little too long. There is some great solo work in “Low Ceiling” though that ranks up there with the best we’ve ever heard from AIC. “Breath on a Window,” “Hung on a Hook,” and “Choke” put together all the disparate pieces that make AIC one of the best guitar rock groups out there. “Scalpel,” with its pedal steel and slight country twang is the most grungy country song you’ll ever hear, and is something that only Cantrell can pull off. The uber heavy “Pretty Done,” sandwiched appropriately between “Hollow” and “Stone” comprises one of the best three rock songs to open any rock album, let alone an AIC rock album.

Legions of AIC fans, like myself, who were once skeptical that Jerry Cantrell, Sean Kinney,and Mike Inez were deciding to soldier on as Alice in Chains despite Staley’s absence are now ashamed to admit that they once felt that way. Staley was one of the truly unique rock vocalists of our age and will always be missed. Cantrell/DuVall just might end up being the Lennon/McCartney of grunge though, and that’s something that Cantrell/Staley could never have been.
Posted by The Ear at 1:23 PM