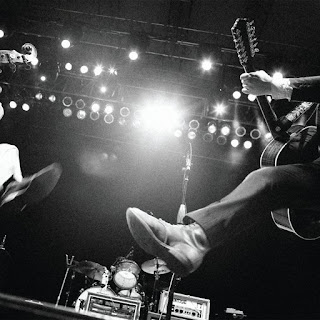 The Decemberists, makers of rock and roll folk for English majors and inheritors of 10,000 Maniacs and R.E.M.’s ageing fans, finally release their first live album. It’s a collection of songs played live during their 2011 tour and is comprised of a generous cross section of their work. Old classics flow well with new tracks. Their most recent release, The King is Dead, showcased their evolving sound’s affinity for old R.E.M. (Peter Buck guest guitar played on several tracks in fact), and growing interest in Appalachian and Americana sounds. In fact, their sound would so much conjure misty Appalachian coal mine hills that they would end up being one of the biggest names to contribute a track to The Hunger Games (Songs from District 12 and Beyond) Soundtrack. (Much of The Hunger Games takes place in Appalachia, the home region of its protagonist Katniss Everdeen). We All Raise Our Voices to the Air is a great snapshot of The Decemberists tight musicianship and solid live delivery of a swath of their songs whose intricate arrangements translate well to a live setting. 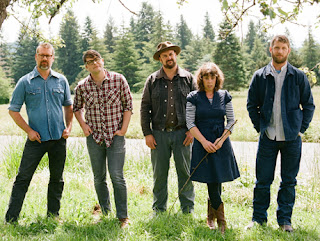 Calling We All Raise Our Voices to the Air a snapshot is a bit misleading though. The double album is comprised of 20 tracks. While none of the songs are particularly reinterpreted or reworked for their live performance (often like U2 did during their live sets-actually increasing the brilliance of some of their songs), Colin Meloy and company prove that there is little if any studio magic at work during the recording of their albums. Obviously, the songs are sonically sharper on their proper albums, but their reconstruction on stage in front of a live audience is top notch and they honestly do not lose much in the translation.

One of the live album’s standouts, “The Crane’s Wife Parts 1, 2 and 3” (a compilation of the separately tracked parts of a song about a Japanese folktale from The Crane’s Wife) clocks in at a whopping 16:09 minutes, but masterfully provides us with a united version of the song. It’s only a few minutes shorter than their novella of an album The Tain, a loose interpretation of the Irish literary saga The Tain Bo Cuailnge. Speaking of literary sagas, “The Rake’s Song” from The Hazards of Love, plays nicely in sequence next to “Leslie Ann Levine” and “Down by the Water” demonstrating that although their sound has evolved or, more aptly, refocused over the years, Meloy’s love of literature, verbose yet encapsulating words, and penchant for story-telling songwriting forever remains a unifying theme of The Decemberists’ songs and sound. All of us former English majors who hang on every note and word The Decemberists write and sing wouldn’t have it any other way.