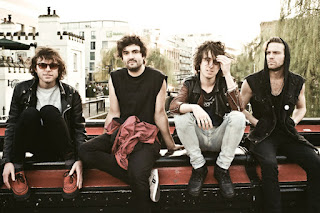 When the Tribes’ Johnny Lloyd sings “Oh no stranger you’re just like me, these things happen we were children in the mid 90’s” during “We Were Children” off of their debut album Baby, one gets the feeling that he ironically really means what he’s saying. If there is to be a full on re-visitation, but hopefully not a full on regurgitation, of 90s rock, there really could be worse bands than Tribes involved. Tribes appears to be destined to rise to the level of Silversun Pickups and The Joy Formidable, thusly forming a trio of the most high profile, and sonically appealing, bands that ape everything 1990s, yet somehow keep it fresh enough to not sound boring. Silversun Pickups got the Smashing Pumpkins covered. The Joy Formidable got everything from Hole to PJ Harvey covered. And while we’re still waiting on someone to step up and get the Alice in Chains thru Soundgarden section covered, Tribes seems to have everything else from Nirvana-lite to The Lemonheads under wraps. Oddly though, to anyone really paying any real attention to Tribes’ sound will discover that they really are just a more marketable version of Ash, Ireland and alt-rock’s most underrated and overlooked band of the past twenty years. Yes, they’ve been around just about that long, and it’s a shame that a band like Tribes, which cites their influence as The Pixies, Nirvana, and R.E.M. but really doesn’t sound like any of them, gets the credit for a sound that Ash has been pumping out for years. Oh well, that’s rock life, and there’s no point in bewailing it. Just remember, as great as Tribes are, and they are pretty great, there’re always others who came before and didn’t quite make it as big, but back to Tribes’ brilliant debut album, Baby…

Baby is a tightly constructed and solid album that clocks in at a lean 40.4 minutes. It has no filler and every song is listenable. Ranging from low slow rockers to upbeat and slightly grungy, way alt-rocky, and sonically uplifting loud rockers, Baby is a well-balanced album of smartly written sing along songs that play well live and loud and as well as charmingly intimate in your headphones. Of all the 90s musical attributes attributed to Tribes and their contemporaries, it most pleasing to see the return of the type of band that can pull off both these types of sounds simultaneously. Singer Johnny Lloyd has the kind of voice that ranges from John Lennon-like echo and pitch to Cobain-like melody and hush. The albums most well rounded track “Sappho,” which many claim is a Pixies rip off, is actually the song that most sounds like Ash in construction, tone, guitar distortion, and lyrical content, albeit with a twist. Lloyd sounds most like Tim Wheeler (Ash’s lead singer/guitarist) here as well. Overall though, Tribes’ don’t rock nearly as loud and distorted as Ash does, and that’s a good thing. If they did they’d be nothing but a pure rip-off band.


Tribe is not a rip off band. That is unless you consider Soundgarden a Black Sabbath rip off, instead of a band working within a progression of Black Sabbath’s sound. Tribes is putting the rock back in alt-rock, something that has been sorely missing in recent years as far as “alt” music has been concerned, and that my rock and roll friends is something to be totally overjoyed about.