The Cranberries: Coming Up “Roses” 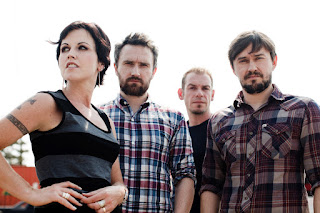 When I first heard The Cranberries, I wasn’t interested in them beyond their lead singer’s hotness and unique voice. Actually, I saw and heard them at the first time since my first exposure to them was the video for “Linger.” I was slogging through grunge at the time in my best pair of scuffed Doc Martens, and The Cranberries were just a little too light and poppy for my taste. A few years later, when I was slogging knee deep through my undergraduate double major of English and Political Science (with an emphasis on International Politics-the Balkan Wars were raging and Eastern Europe post-Soviet Bloc was an area of interest for me) I heard The Cranberries again (heard only this time) and became very interested in them, and not only in their lead singer’s hotness and unique voice, but her words as well. A pretty Irish girl singing about “a war in Russia and Sarajevo too,” the War Child, John Lennon, salvation, The Troubles (as international political scholars will recognize as the now settled Protestant/Catholic War in Northern Ireland) and being “Free to Decide?” Yeah, it wasn’t long before I developed a major crush on her, and The Cranberries, music in general. I was becoming educated enough, and mature enough, to understand that everything didn’t have to be screamed or growled through the microphone to rock. Good rock, and good alt-rock, didn’t have to wail all the time to be worthwhile.

The type of alt-rock that The Cranberries became famous for was, in my mind, a 1990s version of the 1980s type of alt-rock that U2 was famous for early on in their career, specifically up until their third album War. The Cranberries followed the same sort of career trajectory that U2 did, both musically and thematically. The Cranberries' first few albums were pretty focused on introspective/lover lost type of songs. The song “Linger” being the biggest example of this type of song. U2 also wrote some rather emotionally immature songs on their first few albums, Boy and October, but as like with The Cranberries, you could hear the underlying potential and talent that was there. When The Cranberries, working with producer Bruce Fairbairn, recorded and released To The Faithful Departed, they blew their sound, and importance as a band with something to say, wide open.

The hint of the harder alt-rock side of the band first reared its head on “Zombie,” the first major crossover breakthrough song for the band off of No Need To Argue. The harder rock sound would continue to be part of their sound all the way up to, and through, the last two albums they released before going on hiatus. Bury the Hatchet (1999) and Wake Up and Smell the Coffee (2001) are incredibly underrated albums. If they were released a few years earlier, and not subject to being completely overlooked by major rock radio because of the short lived (thank God) reign of Limp Bizkit type rap-metal and its many copycats, these albums might have been ranked with some of the best alt-rock albums of the 1990s. Unfortunately, Fred Durst carried more weight with kids than Dolores O’Riordan, and that pretty much killed off The Cranberries.

Dolores went on to record two poorly received (critically) albums that, like The Cranberries' last two pre-hiatus albums, are incredibly underrated. In fact, Are You Listening? is actually more sonically striking, lyrically interesting, loud, and hard rock-like than anything The Cranberries ever recorded together. It’s a fantastic album, and when The Cranberries got back together to record a new album of material, I was really hoping for some of Dolores’ musical experiences from the recording of Are You Listening? to surface on Roses. Unfortunately, this was not to be the case. While the album ended up being solid, it was nothing like To the Faithfully Departed or Are You Listening? (See my review of Roses here).

Still though, hearing The Cranberries playing music together again brings back some great memories from my college days and the years just after. Hopefully, Roses will do well enough to warrant the recording of another album of material. The band still sounds tight as ever musically, and Dolores, even if she’s no longer a politically angsty rocker, still has a beautiful voice worthy of listening repeat listening.
Posted by The Ear at 11:24 PM