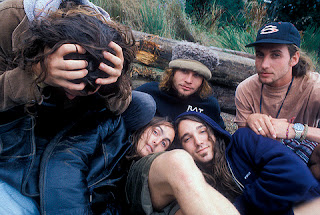 LA Weekly blogger Nicholas Pell recently posted an entry in the “West Coast Sound-Haterade” blog titled “Pearl Jam is The Most Boring Band in 20 Years.” In the blog-happy internet age, where everyone is a critic and self-published writer, one has to be either really good at what they do or really controversial in order to garner any attention. Blog entries that stoke the ire of a legion of one particular band or performer’s fans are a good way to drum up hits, and hits are what it’s all about. Dissing on one of the most popular rock bands of the past 20 years is definitely a way to make a name for ones’ self, especially if you’re writing for a big name site. Pell has done this at least twice now. Since declaring Lulu the Best Album of 2011 wasn’t enough, he went on to call Pearl Jam boring. The reasons Lulu is not the Best Album of 2011, if they’re not self-evident enough on their own, are fully explained here. Everyone is entitled to their opinion though, so please “allow me to retort.”

I don’t know Nicolas Pell, but I think it’s pretty safe to say that he isn’t a fan of Pearl Jam. He starts out by making a snide remark in reference to Eddie Vedder’s vocal delivery. He says he mumbles. I can’t really argue with this one, as Eddie has been accused of mumbling a good bit over the years. What Pell implies is that Vedder “mumbles” all of the time. If a singer mumbled the words in every song that he sang, I doubt that the band would go anywhere. (Look at that other band with a mumbly guy. Although I bet that Pell never liked REM either…) Pell then goes on to take another smart assed and frankly juvenile jab at “Jeff Ament’s endless procession of silly hats.” Pell accidentally counters his own argument almost immediately here. This “procession of silly hats” obviously isn’t boring enough to be forgotten. So already Pell admits, either by mistake or in an effort to purposely undermine himself, that Jeff Ament’s hats, while silly, aren’t boring. Doesn’t one quickly forget and dump from their short term memory that which is boring? Next, Pell makes fun of Stone Gossard’s name. I won’t even touch this one. After this, he refers to Eddie Vedder as being “self-important.” Herein begins the only part of his tirade that even approaches logical, if not necessarily true or learned. 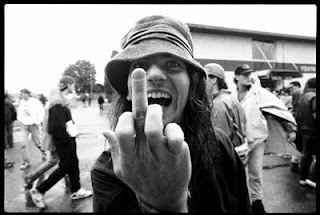 Eddie Vedder has often been mistaken for being self-important, when honestly, especially in the early days, he was a little too raw and honest about himself, his background, his beliefs, etc. Anyone who wears their heart on their sleeve, especially a rock star, is going to get labeled “self-important.” Remember Bono circa 1988? ‘Nuff said. Again though, being “self-important” doesn’t label one as being boring does it? His critiquing of Pearl Jam as not being “grunge” (he does name some bands here that really were “grunge” according to the scene’s purists) really is spot on, in a particular sense that is. Pearl Jam got lumped into the grunge category because of their location, their appearance, and their DIY mentality. These are the things that defined “grunge” much more than the musical style. Grunge was much more than just one type of sound. It was incorporative of many sounds. Punk, metal, pop-rock, and classic rock elements all mixed together to form “grunge.” The bands that originally formed the “grunge” scene all had various different sounds, but all enjoyed each others' take on the guitar, bass, and drums formula. There was not as much infighting in the Seattle music scene as there was in the New York punk scene. The Melvins, Soundgarden, Mudhoney, Nirvana, The Fastbacks, The Gits, Seven Year Bitch, etc. were all stoked by each other’s music, and not much of it was even of the same genre. It was okay to like punk AND metal AND classic rock (we’re talking the originals here, a la Black Sabbath, and not REO Speedwagon). Upon taking all these facts into consideration, one can conclude that Pearl Jam IS grunge. I don’t know how much Pell knows about music “scenes,” and it’s probably more than I do since he’s writing for LA Weekly and I’m writing my own, Blogger published DIY blog, but I do understand grunge, having lived through it. Pearl Jam are grunge.
Continuing to dis on Vedder, Pell makes some comments about how he “played the brooding, tortured frontman, constantly brushing hair from his face, affecting shyness.” Again, how is this boring? Vedder was pretty different from most of his grunge peers at the outset. He wasn’t necessarily as ready for the limelight as a Chris Cornell or Andy Wood was. Vedder was in over his head, and it took a while for him to come out of his shell. Once he did though, especially as documented in Pearl Jam’s performance at Pink Pop 92, he was anything but an “affecting shyness” frontman. Pell says that while Vedder stood around brooding, the rest jumped around and “grinned like simpletons.” Again, is he talking about every other member of the band? Did Pell ever see them in concert? If he’s basing his assumptions on Dave Abbruzzese’s grin directed towards Jeff Ament during the band’s performance on SNL the week after Cobain blew his brains out, it’s difficult to label the whole band as perpetually “grinning simpletons.”
“Collectively they mouthed all the shibboleths about gun control and "white male dominance, maaaaaaan ..." Seriously, who did they think they were fooling?” bewails Pell next. Well, I’m not sure if they were really trying to fool anyone. Yes, they were a bunch of comfortable middle-class kids at the time they formed. What do most middle-class kids, who have no real worries, do most of the time though? Get high, chase girls, get into the appropriately cool trouble, i.e. get busted busting cherries, getting high, or tripping out. If they happen to be talented enough to form a rock band, it’s usually to get laid. Eddie Van Halen once bragged, saying something to the effect that “I was always in my room playing my guitar and missing out on stuff, but once I got in a band I got more pussy than everyone.” While that’s not a direct quote (sorry can’t find the vid of this interview), it is indicative of the type of music that Pearl Jam and grunge was going against the grain of. Van Halen were a bunch of grinning simpletons who gave birth to a plethora of even worse sounding and grinning simpletons. Their musical pedigree was one that eventually evolved into the likes of Warrant, Poison, Whitesnake, and the like. Coming from the perspective of someone who is a member of Gen X, THAT was boring, pointless music FOR grinning idiots. When Pearl Jam got up and performed songs about the warning signs that lead to teenage suicide, “white male dominance,” and abuse, they were doing something that was completely unique in rock music at the time in comparison to what was dominating AOR radio. A gaggle of guys who look like girls with prettier makeup jobs than most supermodels, all singing about how hard they can swing their dicks, is boring. Pearl Jam, and their grunge counterparts, were a breath of fresh air, and the exact opposite of boring. As Pearl Jam got big, their message got even more important and intelligent. Again, for the most part, when a bunch of middle class kids got together to attempt to rock they either (1) played at rebellion or (2) chased the ultimate lay, then sang about it. Pearl Jam did something different.

Finally, Pearl Jam isn’t boring musically. Saying that though isn’t the same as saying that Pearl Jam are doing something brand new musically. If Pearl Jam is boring, then the whole genre of blues-based, Hendrix influenced, or simple-punk styled music (as is evident in Pearl Jam’s later music) are all boring. Seriously, what can be considered new in rock post-Hendrix? The trick is for this type of music, which is all of a same style, and therefore similar, to be presented in an interesting way and within interesting contexts. This is something that Pearl Jam has continued to do over the years in spades. So while I wish Mr. Pell plenty of luck as a blogger for a major site (he’s well on his way to it), I’ll be anxiously awaiting something “new” from him other than controversy stirring and hit-generating designed rants, which is something that is itself becoming a boring and repetitive aspect of the blogosphere.
Posted by The Ear at 1:47 AM