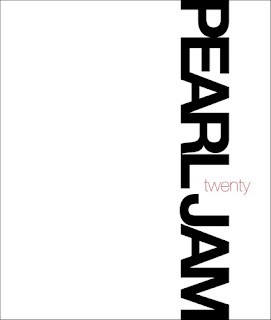 Leave it to filmmaker, rock critic, and all around rock fan extraordinaire Cameron Crowe to come up with the description of what it’s like to see Pearl Jam live in concert. A description that I’ve been trying to communicate for years, but just never got quite right:
“A Pearl Jam concert today is about much more than music. It’s about the kind of clear-eyed spirit that comes from believing in people and music and its power to change a shitty day into a great one, or looking at an injustice and feeling less alone about facing it.” 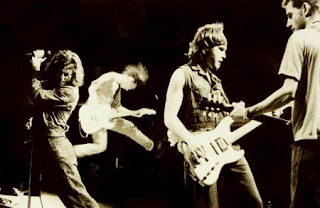 A Pearl Jam concert is a communal, dare I resort to the old cliché, religious experience that is the hallmark of very, very few bands’ concerts. The only other band that even is on the same level in a live setting, or at least used to be, is the now “it’s cool again to hate them again” U2. Earlier U2 shows, including the early 1990s Achtung Baby influenced Zoo TV and the early 2000s All That You Can’t Leave Behind influenced Elevation Tours, are the only other shows that even hold a candle to any Pearl Jam show. One would imagine that the forefront personalities of each band, Eddie Vedder and Bono, would be totally on the same page and near soul mates as evidenced by their reluctantly beared messianic followings. As Crowe makes evident, while Eddie might now have much more respect or at least tolerance for Bono and U2’s massive spectacle, this wasn’t always the case. As Heart guitarist/singer Nancy Wilson states in Chapter 1993 of Pearl Jam 20 in reference to the European leg of U2’s Zoo TV tour, (Pearl Jam opened several shows for U2 on that tour), Bono and Eddie had some “philosophical differences:”
“That tour tested the foundations of the basic Seattle artistic integrity law at that time. The commercialization that U2 was seriously poking fun at with Zooropa was kind of cynical, but it was so big that it was hard for guys like Eddie and Pearl Jam, who had basically exploded the megacorporate façade of the whole eighties music scene. Eddie and Bono spent a lot of time in corners, talking all night. They had philosophical issues to discuss. He felt he needed to understand it, and he couldn’t, but I think Bono finally got him there.”
Whether or not Bono “got him there,” Eddie Vedder, Stone Gossard, Jeff Ament, Mike McCready, and Matt Cameron have “gotten” millions “there” with their 20 years of music and message. “There” is a different location for every Pearl Jam fan, but the journey embarked upon by all Pearl Jam fans is the same. It consists of a no bullshit, clearly communicated, and at times varyingly and fragilely introspective or outwardly and scathingly honesty. Pearl Jam’s brilliance, which in turn solidifies their importance, which again in turn is only intimately understandable to their most insightful fans, is their steadfast reluctance to show you the path. Their music, their concerts, and their careers are founded on the fundamental truth that alone with a set of headphones or in a crowd of hundreds, the personal visualization of the music video that your mind creates while listening to Pearl Jam’s music is of much greater importance, and worth, to the listener than anything that Pearl Jam can concoct on celluloid or digital playback. That is, after all and ultimately in the end, someone else’s vision and personal trip through the Peal Jam soundscape. Yes, the band has made videos, when the message was deemed important enough, but as Eddie has repeatedly made clear, time alone inside your head with the music and the images, ideas, and visions that it creates as an outgrowth of the music, allows the listener to become an active participant in the creative process that is Pearl Jam. In this way, Pearl Jam is much closer to their fans spiritually and creatively than they would be if their mugs were plastered all over MTV or internet music video and blog sites. As quoted in Pearl Jam 20, while guest appearing on the radio show Rockline while premiering music from Vs. in 1993, in response to this question: “How would you describe the music on your new album?” Eddie responded, “We wouldn’t. We’d listen to it. Or tell you to listen to it.” 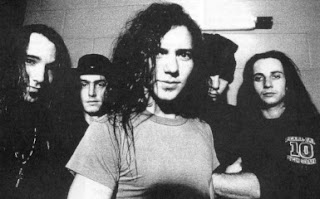 So one might be inclined to ask then, just what purpose does a book filled with pictures, concert stub scans, scans of set lists, live and candid shots of the band in concert, and a smattering of album art about a band that refuses to shut their listeners out of the joint creative process that is listening to their music serve? The answer is simple. The images selected for Pearl Jam 20 all serve to recreate in the reader’s mind the powerful experience of joint creativity that is listening to Pearl Jam’s music and participating in a Pearl Jam concert. Images of the band in concert interspersed with limited album art images all invoke memories of the most powerfully joint creative experience one can have with the band, the live experience. Pearl Jam shows are renowned for their lack of pyrotechnics, excessive lighting, and large video music regurgitating screens, all of which, admittedly, can jog the creative process in the minds of concert goes if done right, like these things do at a U2 concert. With Pearl Jam though, the concert experience is centered on the musical experience, which is bare and minimalist naturalism at its finest. A man alone with his wood based guitar, or his voice, and his passion for the music he is playing is as stripped down and simple as spiritually and naturally infused rock music can be. The countless images of the band on stage, often in enlightened musical rapture, bring to mind and focus the attention on the music being played. Pearl Jam 20 is best read and perused with the band’s music playing in your headphones. 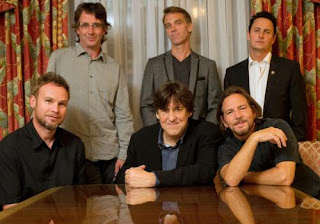 The book does have words too though, a great deal of them actually. The anecdotes related, which are divided into the dates of each year’s respectively titled chapters, are also well suited to sparking a bare bones and simple recollection of what the photos in Pearl Jam 20 also spark. There is no flowery language, beyond Cameron Crowe’s well crafted introduction. There are plenty of reminisces by Eddie and his band mates about the origins of some of their songs, but they mostly disclose only the initial impetus or idea that sparked a certain song or album. There are also plenty of guest commentaries from the likes of the aforementioned Nancy Wilson and Bono, plus Neil Young, Dave Grohl, and one of the greatest producers of all time (and the producer of Vs) Brenden O’Brien. Some have described Peal Jam 20 as a coffee table book. It isn’t. It’s the best and most enlightening book on one of the world’s greatest bands since Kim Neely’s Five Against One, and like Peal Jam’s music, it invites the reader to participate in the same creative process that Peal Jam’s music does. One couldn’t ask for anything more.
Posted by The Ear at 3:14 PM